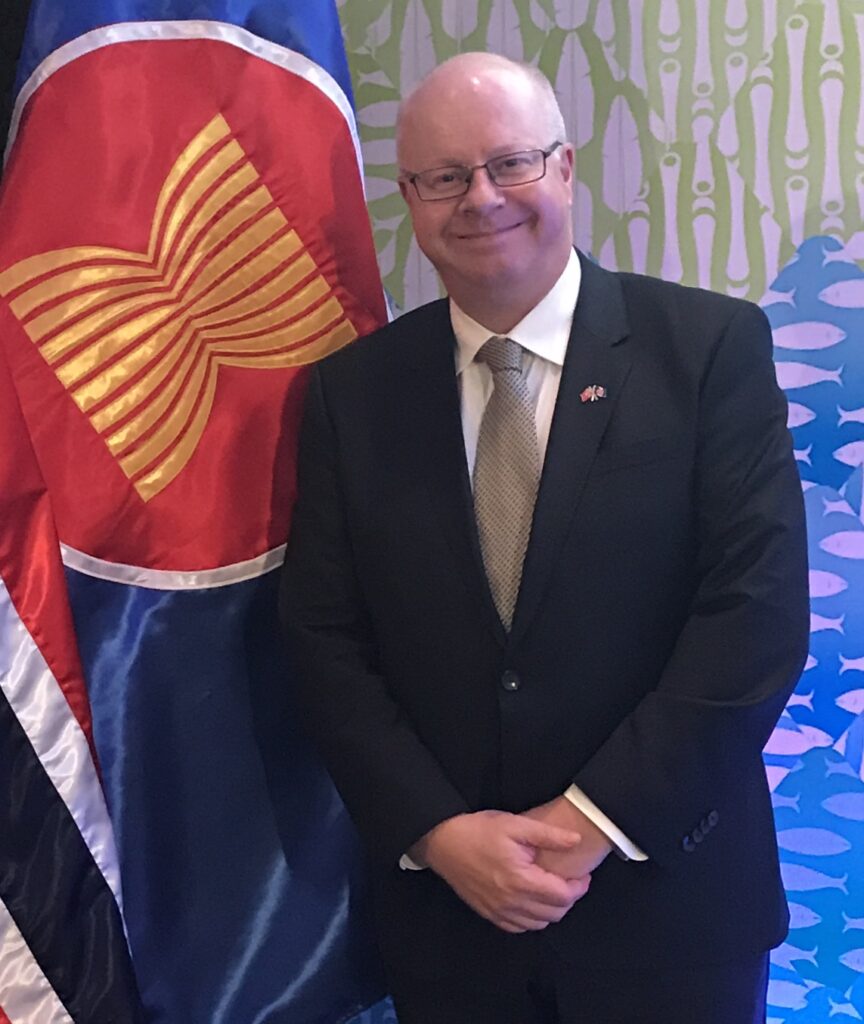 SNCC recently welcomed Norway’s Ambassador to The Association of Southeast Asian Nations (ASEAN), H.E. Morten Høglund, as permanent observer to the board of SNCC.

In 2015, Norway became a sectoral dialogue partner with ASEAN. In December 2015 ASEAN and Norway held their first Joint Sectoral Cooperation Committee meeting, where then Deputy Minister of Foreign Affairs Morten Høglund stressed the importance of the cooperation:

– Being an ASEAN partner is important for Norway as it allows the country access to important political arenas and enhances opportunities for Norwegian companies in Southeast Asian markets.

In 2019 the ASEAN countries were collectively Norway’s fourth largest trading partner and home to the highest concentration of Norwegian foreign companies. Ambassador Høglund made history in 2017 when he was appointed as Norway’s first dedicated Ambassador to ASEAN.

– I am looking forward to joining the Board of the SNCC, and to take part in the upcoming events. I am also open to direct dialogue with companies or clusters about opportunities in the Region, says Høglund.

Main cooperation with ASEAN within digitalisation, energy and environment

Norway is by no means a newcomer in Singapore. The many years with Norwegian partnership within the maritime industry has laid a solid foundation for introducing other Norwegian parties. The long-standing cooperation goes far back in history – even preceding the independence of both countries.

– In addition to concentrating on business opportunities between Norway and Singapore, SNCC has an interesting regional focus on Southeast Asia. Personally, I hope to see even further increased Norwegian business in the ASEAN region. As a permanent observer to the Board of SNCC I get the opportunity to exchange ideas with key representatives from the Norwegian business community with interests in Asia. My main contribution is to look at how diplomats as well as Norwegian government institutions can assist with finding new opportunities for Norwegian organisations in ASEAN, says Høglund, and continues:

– Currently our main cooperation with ASEAN concentrates around digitalisation, energy and environment – which are all areas of great potential for Norwegian companies. When it comes to new markets in the ASEAN region, the demand for digitalisation is on the rise, and there is a great necessity for solutions of high quality, particularly in the less developed countries. At the same time the less developed countries make for challenging markets, and hence a local presence could pay off.

A new realm of possibilities for competitive Norwegian solutions

– Singapore and the rest of the Southeast Asian region is a dynamic and innovative region, which in the time leading up to Covid-19 experienced strong economic growth. Hopefully this is a trend that will pick itself up again in the near future. In my opinion Norwegian companies as well as the Norwegian Government can learn a lot and be inspired by Singapore and other countries in the Region. Solutions from Norwegian companies are often very competitive, and the companies are sought-after as partners, says Høglund.

– Right now, the main issue in ASEAN as in the rest of the world is coping with Covid-19 and its ramifications. In addition to health issues, the focus is on how to revitalise the economy and to keep the wheels in motion. On a positive note the recent situation has opened a new realm of possibilities within health, digitalisation, farming, education and trade. Some Norwegian companies have already managed to position themselves by offering innovative solutions that targets new challenges arising from the current situation.

Join our upcoming webinar on Business in the ASEAN Region where Ambassador Høglund will give us a briefing on the current situation in ASEAN. Sign up for our newsletter to stay informed about our upcoming events.